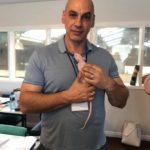 Experience:
• Over 20 years in Physiotherapy & Chiropractic Care
• Over 10 years in mixed practice

John Fossey qualified as a physiotherapist in 1983. After working in private practice and with elite sports teams he decided to retrain as a chiropractor at the AECC qualifying in 2005. Shortly after this John trained in animal chiropractic. John is currently finishing (end of 2017) his functional neurology training with the Carrick Institute.